Is it me?  Or are we going back to the old ways in more ways than one.  Mobile free Mondays so people can actually talk to each other, Kylie’s new album has been released on vinyl and cassette and some people are having a varied diet of some days meat free?  Maybe being ‘old fashioned’ is the new trend?  So going back to soap and water may be the next thing.

This article answered some questions for me and, I suspect, many others too about why so many people have developed allergies over the last 20 years.  Cleanliness is next to Godliness they say but have we taken it too far with bleach sprays, anti-bac. wipes and plug-in room fresheners?

Wet wipes could be putting babies at risk of allergic reactions by creating a breach in the skin’s natural protective coat that makes it more sensitive to unusual chemicals, a study has found.US researchers hailed a “major advance in our allergy understanding” after showing they can develop after repeat skin contact in an area where soaps have stripped the natural oils from the skin.

If wet wipe residues are not rinsed off, babies are then vulnerable to absorb allergy-causing chemicals when they’re picked up or touched, the authors said.

This is particularly true for children who already have a genetic predisposition for developing allergies that are also linked with conditions like eczema, which affects a third of childhood allergy sufferers.

The findings go some way in explaining how food allergies, an extreme immune response to harmless substances, start and why allergy rates have increased nearly 20 per cent in countries like the US in the past 20 years.

“This is a recipe for developing a food allergy,” said the study’s lead author, Joan Cook-Mills, a professor of allergy-immunology at Northwestern University.

“It’s a major advance in our understanding of how a food allergy starts early in life.” 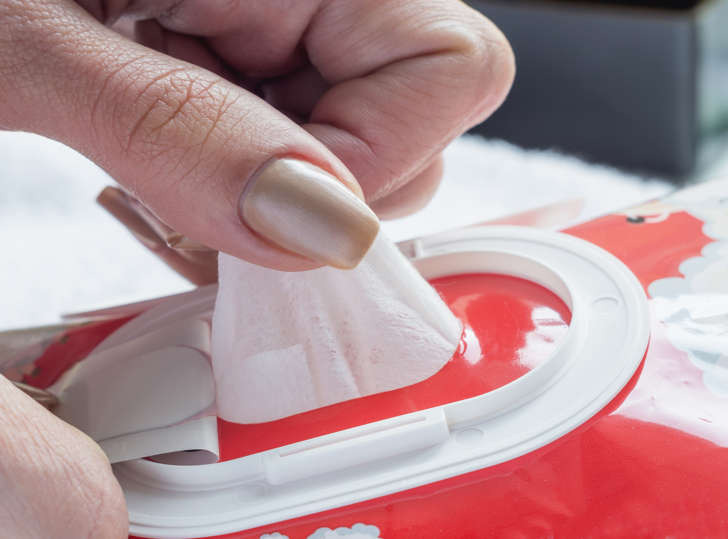 © provided by Shutterstock Wet wipes in a woman’s hand.

Eczema is caused by when genetic mutations disrupt some of the proteins embedded in the skin that create the barrier effect.

But in a test in baby mice with these eczema mutations, exposure to peanuts alone wasn’t enough to cause an allergy in later life.

After reading about studies where drugs were delivered through the skin using soap to break down the barrier, Professor Cook-Mills said: “I thought, ‘oh my gosh! That’s infant wipes!’”.

Repeating the experiment, the team first applied sodium lauryl sulphate, a common soap also found in wet wipes, to the mice’s skin before exposing them to common food and other allergens.

They were given three or four skin exposures in a two-week period, and were then given egg or peanut to eat. The researchers found the mice developed a rash at the skin exposure site, as well as having allergic reactions and body-wide anaphylaxis – the shock response in serious allergies.

The wet wipe effect could be similar to the skin barrier breakdown with a mild rash or bad eczema, and Professor Cook-Mills said parents should go back to older ways of washing infants.

“Reduce baby’s skin exposure to the food allergens by washing your hands before handling the baby and limit use of infant wipes that leave soap on the skin.

“Rinse soap off with water like we used to do years ago.”

When I got home tonight I received a lovely gift. Thank you letters from some of the Class at Sedlescombe Primary School. I went in last week to talk to them about muscles. It was an absolute joy to do and to receive their letters was so lovely. They wrote about what they had learned using words like ‘autonomic’ and telling me how much they enjoyed it. Drawings of the heart and biceps. They had put so much effort into writing them. Just so lovely.

“…Speaking your truth is the most powerful tool we all have …”

Take courage from all the other women who have, and speak yours.

I was reflecting this morning on World Mental Health Day yesterday.  I saw a very moving interview with Frank Bruno about his new book ‘Let Me Be Frank’ and his motivation in creating the Frank Bruno Foundation.  I was very touched by his story and have been very moved over the last weeks by high-profile people discussing issues of mental illness after significant events.  All of this is to be welcomed and applauded.

So I was thinking about the theme for this year’s World Mental Health Day being workplace wellbeing.  We tend to think of mental illness as being extreme and sufferers being ‘Sectioned’, but everyday, people are suffering from stress, lack of self-esteem, low confidence, marriage break up etc – all of which may not be traumatic as we think of trauma but can severely affect our performance at work.  The very energy needed in managing anxiety or depression can be extremely debilitating and difficult to manage.

I was talking to someone today who had heard me talk about my work with confidence building in women and he asked me if I worked with men.  We had an interesting discussion about the pressure on men to just ‘pull yourself together’ – or ‘snap out of it mate’.  ‘Big boys don’t cry’ and the pressure to be the strong provider perhaps only adding to the perception that men shouldn’t show their feelings – that it is a sign of weakness.

When a man shows his feelings with another man, that man may feel uncomfortable and not know how to respond.  It feeds into an innate sense in men to be action orientated and ‘fix it’ and they may not know how.  To be able to be with someone in their feelings and really hear them is sometimes all that is needed.  When we are heard, we feel valued.

Later on, after our discussion, the man in question apologised to me for the conversation.  Actually, I felt privileged that he would share his feelings and story with me and I told him that to do that, and to seek help, is a healthy state.  It is a place of vulnerability and courage and from that place can come change.

I was really struck by two things that came my way this week.  One is the Simon Sinek interview where he explains how Millennials feel about the ‘promises’ they were made about how life is and our responsibility as Leaders and the research from the UCL (University College London) Institute of Education and the University of Liverpool which found that nearly a quarter (24 per cent) of 14-year-old girls and nine per cent of boys the same age are depressed.

I was a teenager once and I found that time in my life very difficult.  I had feelings of raised emotions, confusion and a lack of understanding of why I felt the way I did.  I didn’t however self-harm or consider ending my life.  The sad fact of the matter is that many of our young people today do.

Some would argue that teenagers have always felt that this time of life is difficult, raging hormones, exams, having to decide what you want to do for the rest of your life are all probable factors.  This research, however, points out that 10 years ago, the figure for girls was less than 12%.  So there is an increase in incidence of depression in our young people, so what’s happening?

Is Simon Sinek on the right track?  We live in a time when young people will take a selfie an average of four times before they are happy with it and even then may retouch it.  If it’s posted on social media and they don’t get as many ‘likes’ as they think they ‘should’ get, then they will take it down and feel bad about themselves.

Our young people are externally referenced, they don’t want to be different, they want to be, look and do what everyone else in their peer group – not all but apparently a large proportion.  I was different, I didn’t want what the mainstream wanted and I was bullied, in a relatively minor way.  I was excluded from the group, names were called etc. I didn’t have the additional pressure of social media and at my core I had a strong sense that being me was actually ok – even though I was always last to be picked for the netball team.  Over the years I have learned that being different is actually an expression of my individuality.  I have come to like it and I have grown through it.

How do we talk to our children when they have these feelings and this culture? How can we relate to it if it’s not our experience, can we understand it?

I was talking to someone this week who told me that no matter how often they tell their young daughter that she is beautiful or has done well, it just doesn’t sink in.  She can’t accept it.

This research and these issues sadden me.  I want every child to feel ‘special’ as we have taught them, we are all special, individual and magnificent – but in our own unique way. To value myself, to appreciate my uniqueness and my magnificence has been hard work. It has been work.  Work on myself through ‘therapy’ and self development.  I didn’t have the extreme pressures that young people have today.  It’s tough for them and as Simon Sneak says ‘It’s not their fault’.

When someone asks you how you are do you say “I’m ok” or “Not too bad thanks”.

When I was asked that this morning I replied “I’m fantastic thanks, how about you?”  This doesn’t mean that there aren’t challenges, worries and fears around for me.  It means that I can still stand in my power and my joy whilst experiencing them.

This is because I asked for help.  Being a practitioner doesn’t mean I have it all sorted.  I too need an objective view and support.